Ruislip Lido | A Lake with a Beach in Ruislip.

The Lido in never locked, so access is possible 24/7 however certain attractions such as the cafe, railway etc. open and close so the are official opening hours which are as follows.

A view taken over Ruislip Lido in 2019 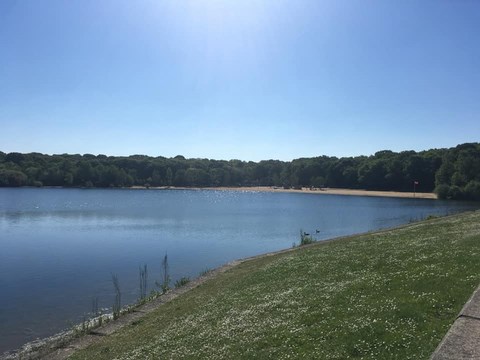 Why you cannot swim in Ruislip Lido

Ruislip Lido is a large lake (technically a reservoir) towards the north of the London suburb of Ruislip in the London Borough of Hillingdon.

It makes a splendid walk, there is a miniature railway, a pub, a beach, several picnic areas, children's playground and a café. It is, in the summer, a very popular place to go.

There is no admission charge at Ruislip Lido but there is a charge to ride on the railway and to park your car (unless you have a "Hillingdon First" card).

The car parks at Ruislip Lido (and car parking in the area in general) can be confusing. Check out our Ruislip Lido Car Parks section if you plan to drive to the Lido. Cars frequently get tickets or towed away. We also suggest alternative parking options if you find them full.
Use the menu at the head of each page to find your way around this large web site. Here you will find information on the its construction, its heyday (1960's and 1970's), it's demise and rebirth to what it is today, a VERY popular west London attraction.
What we all today know as Ruislip Lido started life in 1811 as Ruislip Reservoir and was built as a feeder for the Grand Junction Canal, later, in 1933, to become the Grand Union Canal (Company), and thus our nearest canal being known by the name it has today.

The area selected was initially a shallow valley flanked by Park Wood to the south and a now non-existent hamlet of Park Herne to the "north", where the latter was demolished to make way for the reservoir as it was built.
You can read what people think of Ruislip Lido on TripAdvisor here