You can see some pictures to refer to on this page

As you are no doubt aware the Canal Feeder starts at the "dam" end of Ruislip Reservoir, where it leaves the reservoir at the South-East corner.

There below the main footpath you will find a huge concrete opening, guarded by iron railings with a notice to the effect of "deep excavation" or similar. It flows through the old valve house, which controlled the flow of the Feeder as necessary when it was in operation. This can all be seen from the footpath along the top of the dam, on its "down" side.

At one time it was possible to actually walk around the valve house (and even IN it not so long ago) but this is now almost entirely inaccessible due to undergrowth and fences that have been erected. You can however see, from the path, the old Canal Feeder snaking its way from the dam along the rear of the houses and gardens in Reservoir Road.

It next appears where it flows under Bury Street, just south of a works compound and just about directly opposite Breakspear Road. It proceeds at an angle under Bury Street and its tunnel exits south of Breakspear Road and runs along the field there heading in the same general direction, to the right of the path as we follow it. As it slowly disappears into thicker and thicker undergrowth and bramble (and blackberries) it becomes difficult, but not impossible to follow until it actually comes to a dead end under the gardens of a newish housing estate. "Brickett Close". It is due to the fear of this being flooded that the "Lido" is now maintained at so low a level.

Between the shops and the stream is an area of derelict ground upon which there is a large manhole cover and I believe this is the course of the Canal Feeder where again it is underground. Much of the street furniture around this area shows signs of an old bridge there.

The next positive place to view the Canal Feeder is where it crosses Ladygate Lane, near the bowls club. From there it can be seen quite openly approaching from the north, with no water and of the perfect dimensions. I have been unable to plot nearer the Lido from this point due to the privacy of the grounds.

The Feeder crosses Ladygate Lane in a South Easterly direction and can be picked up almost immediately following the course of a footpath that leads between two schools. It follows this footpath to the rear of the new housing development at Sandalwood Drive, where it can be seen disappearing again into two or three large sewer type pipes.

Once again there is a stream at the junction of Glovers Grove and Sandalwood Drive but this is NOT the Canal Feeder. The next vantage pint is the dead end road of Whiteheath Avenue where, if you bully your way through the undergrowth you will find the Feeder at the
bottom of a 10 meter hand dug cut, trapped between the houses and Old Clack Farm, and again it disappears into impenetrable undergrowth. So we move on to Woodville Gardens and the "Aqueduct".

On reaching the end of Woodville Gardens go through the locked vehicle gate and turn sharp right. You have just crossed the line of the Canal Feeder. Follow this general direction and you will arrive at an area of undergrowth, which if you progress through, you will find yourself at the site of the famous aqueduct.

The more intrepid amongst you may like to follow the line of the Feeder, against its flow, through the undergrowth back toward the Lido as further along there is an interesting feature, where the back gardens of some properties in Ravenscourt Close appear to have "spilled over" the Canal Feeder. If true this would of course have the effect of extending the property. I think. Possibly. Allegedly.

After following the course of the Canal Feeder back to the field at the end of Woodville Gardens we can pursue it along the Eastern edge of that field, through the blackberries (a feature of the Canal Feeder throughout its length, as far as I can tell) along the back of Glenhurst Avenue and down the side of the allotments, until our progress is halted by an overflow stream which leads to the right, down to the River Pinn.

We must now move into Ruislip Golf Course, which is only just beyond the point where we now stand. Those amongst you who have had the pleasure of playing Ruislip Golf Course (like me), and are perhaps not the best golfer fellows in the world (like me), may well have ended up in our Canal Feeder without even realising it (like me). It enters Ruislip Golf Course about forty yards from the tee of
the fifth hole, on the left of the fairway. It crosses both the fifth and sixth fairways at right angles to them both and then turns left and meanders its way along the tree line to the right of the sixth before diving into the trees and crossing "Clack Lane".

Clack Lane is a sort of gravel/cinders footpath that leads from the road into the golf clubhouse, up to the river Pinn and thence to Old Clack Farm.

Once across Clack Lane the Canal Feeder snakes through more undergrowth (and blackberries) until it appears on the Northern edge of the tenth fairway, which it crosses, followed by the fifteenth. It is all very visible at this point though I suspect the alignment is no longer its original as the demands of the golf course have made an impact.

It then loops around the back of the teeing area of the eighteenth and finally crosses the first fairway about two hundred yards from the tee. You are now faced with the Great Western Railway.

As our Canal Feeder predates the GWR by some years, the railway was built over the top, and the Feeder has its own little tunnel/bridge alongside which is a "cattle tunnel" whereby the local herdsmen could drive livestock past (or under) the railway without fear of being mown down. This is still accessible as a public footpath and exits along a small path, next to the Canal Feeder, into The Greenway, where the Feeder crosses under a road-bridge and then off towards The Green. You can walk most of this length but it becomes impassable (without a macheté) shortly before The Green.

So the next point of call is The Soldiers Return, where if you like, you can refresh yourselves, before wandering down the green path to the left of the pub. This is sandwiched between the pub and the scrap yard and if you move over toward the scrap yard you will find blackberries and the ditch of the feeder. This can be traced along its reverse flow back up to an ancient stone bridge that the feeder flows under, and which we almost reached on our passage from The Greenway. This bridge must date from the early nineteenth
century, when the feeder was constructed.

This green path, I believe, runs up to the cricket club but in times gone by was probably a major thoroughfare up to Breakspear Road and Newyear's Green. Its width and stature are very impressive and it is another little known part of Ruislip.

The Canal Feeder crosses High Road Ickenham/Ickenham Road just south of the scrap dealers and then hooks right along the edge of what was the American base all the way to Austin's Lane, where it turns left and follows the lane past the Metropolitan Railway (the crossing of which is an impressive piece of engineering) all the way to the common fields of Ickenham Marsh, finally to the new A40 extension.

At this point I consider we leave Ruislip ....you can read more about the route from here at this page 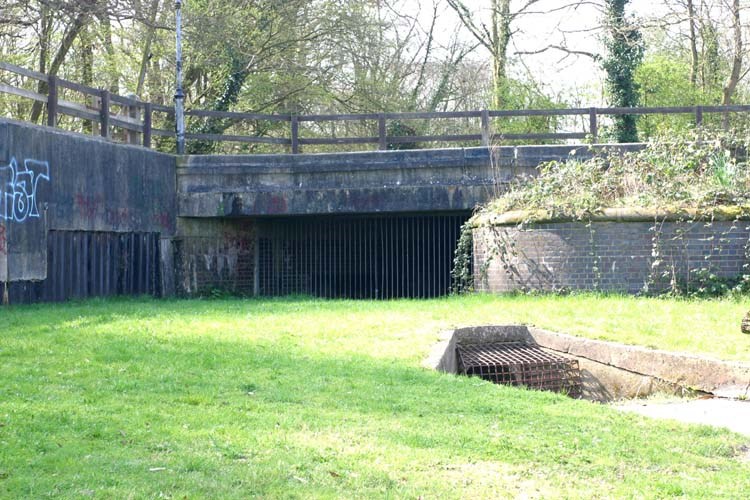 There is an excellent page to be found on the London Canals web site tracing the route of the feeder.
Sadly from page three the images no long appear and the site is no longer updated.
You can visit this site here