Intro and the route to Clack Lane

One of two major GJCCo feeders in the London area, this was one of the longest ever built. It traversed the countryside between Ruislip and Hayes

The Grand Junction Canal Company built its reservoir at Park Hearn, near Ruislip in 1811. The engineer was John Rennie. The waters from the reservoir were taken by a lengthy feeder southwards to the Grand Junction canal at Hayes Gate Farm, near Southall. It was around eight miles long and completed by 1816. The location where the feeder met the canal was about 200 yards north of the current Uxbridge Road crossing in Southall at the present day Tollgate Drive.

The feeder’s long length was responsible for its eventual downfall. The drop in levels between Ruislip and Hayes was quite minimal, causing a sluggish flow of water. It silted easily and required constant maintenance. The feeder was last used in 1851 to carry water that had been retained in the reservoir for the canal. However it continued as an emergency overflow from what was now called Ruislip Lido. It also carried excess water from local drains.

Part of the feeder was rebuilt between 1928 and 1930 to continue its function as a drain between Ruislip and Lynhurst Road in North Hillingdon. In this respect it was usually referred to as the Ickenham Stream. In 1991 fears of flooding caused the Lido to be lowered somewhat, and the overflow into the feeder stream was diverted to the Canon Brook (information from Ruislip Online ). Nevertheless it still proves useful as a drain between West Ruislip and the A40.

It also doubled as a drain from Charville Lane to the Yeading Brook, which took over this role in the 1990s when the A312 by-pass was built.

One hundred years after it last fed the canal, in 1951 the Lido was sold to the Ruislip-Northwood Urban District Council. In 1965 it was transferred to Hillingodon LBC. Since the early part of the 20th Century the ‘reservoir’ has been developed as a leisure amenity and known as Ruilsip Lido. This includes watersports, boating and a miniature railway that encircles much of the lido.

There is evidence the Grand Union Canal Company moved its offices to Ruislip Lido during the second world war, but it is not know where these were located.

The first part of the feeder walk from the Lido to Sussex Road, Hillingdon, is mostly fair, with occasional difficult sections and being mostly part of the Hillingdon Trail. From there to Kingshill it is mostly hard going, many sections proving to be difficult to walk, with parts of the feeder totally inaccessible. From Kingshill Avenue to Yeading it is fair to rough walking, and the final section to Hayes is entirely on street walking. One should allow a good four hours of walking at least. The Hillingdon trail misses about 40% of the feeder’s route, so should not be relied on to locate the feeder’s whereabouts.

A view of Ruislip Lido looking southwards. The water for the feeder left at the south west corner (extreme right in picture.) The water level today is kept well below what it would have been 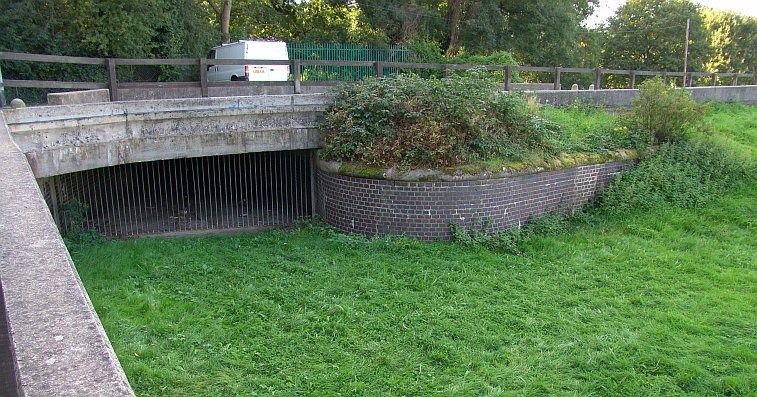 A view of the feeder intake. Its much changed from the days when it was in use and the only crossing at this point was at the far end at what was known as the valve house – where the water drops into a tunnel and channeled down to the start of the canal feeder itself. This part of the Lido was in use as an emergency overflow until 1991. 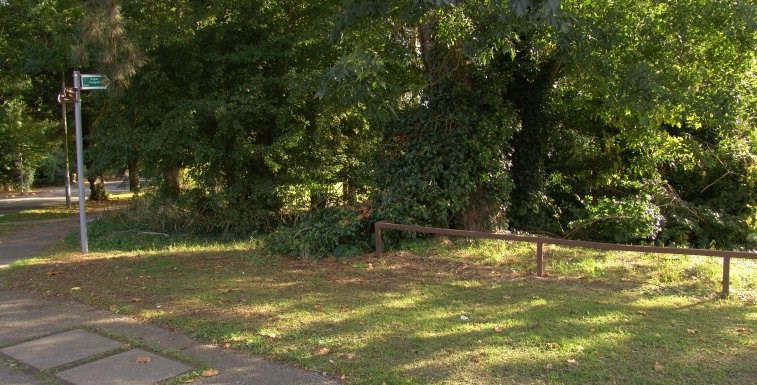 Not much can be seen for the first mile or so, as new development has encroached or destroyed the route of the feeder. However where Bury Street and Breakspear Road meet, near to Ruislip Lido, a public footpath sign indicates a route that actually runs along the mostly obliterated feeder route. Right by the junction itself, as in the picture shown, a small bit of the feeder can be seen in the trees. As one walks southwestwards, the route passes the rear of new housing, and there are few clues to the feeder’s existence 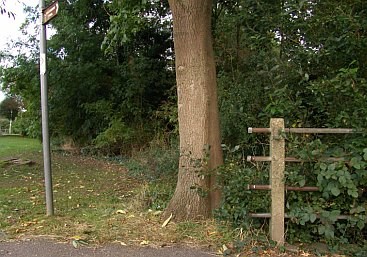 Once Howletts Lane is reached, so few clues as to the feeder’s existence makes one think they’ve taken the wrong turning. In the view (below) the brown Hillington Trail signpost can be seen (and which follows the feeder’s course for much of, but not all, its route.) Next to it by the tree are railings and these at one time protected pedestrians from falling into the canal feeder. On the opposite side of Howletts Lane (above right) a new footpath takes one through a lot of new housing estates. The feeder’s route has been virtually obliterated, and one is left with no choice but to walk along Wallington Close towards Ladygate Lane 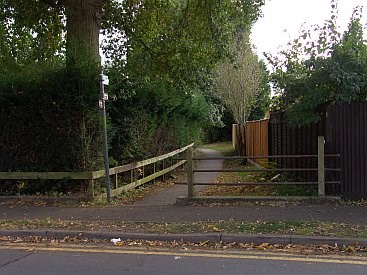 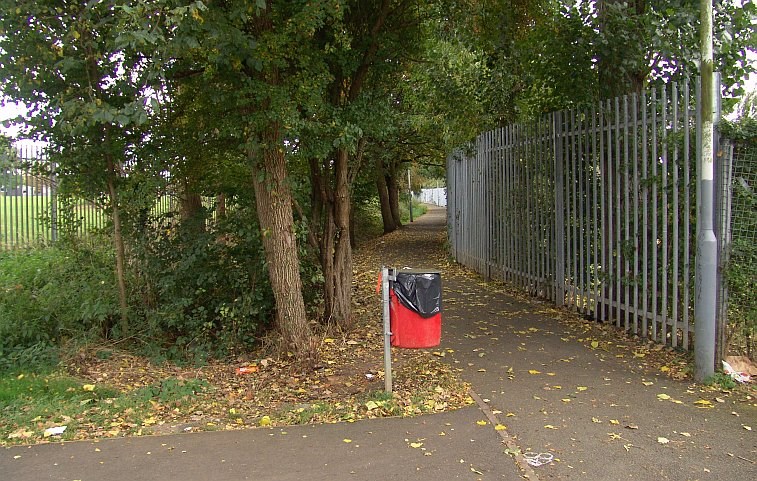 At Ladygate lane one must turn left and walk for a short distance towards the Whiteheath School. On the eastern side of the school boundary this footpath and its distinctive metal fencing can be seen. The canal feeder is clearly visible for a good distance on the left side of this path, and at least three small overbridges remain 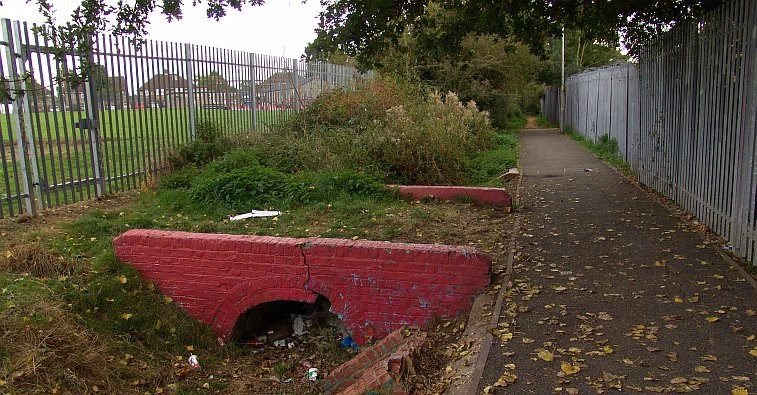 The feeder’s route is now clearly seen, as is this small accommodation bridge that has been painted red for reasons unknown. It runs between Sandalwood Drive and Whiteheath Avenue 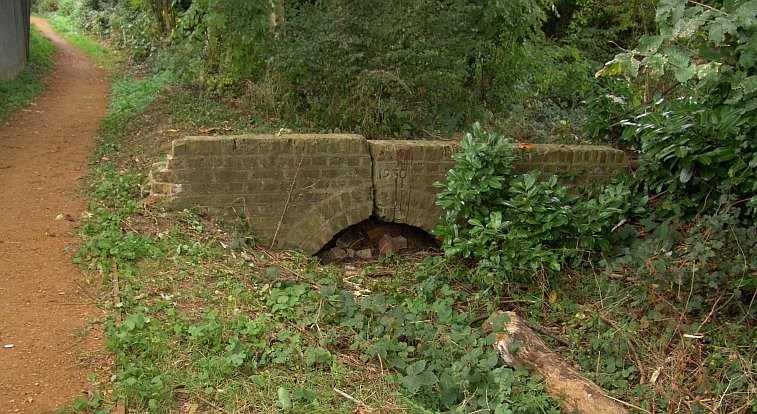 This is the next accommodation bridge. In this view looking back towards the Lido, the date 1930 can be clearly seen on the bridge’s southern abutment.

Many sources tell us the feeder was improved in 1930, and this is no doubt proved by the existence of the date on visible structures. However the work was actually begun in 1928. This date can be seen on a couple of bridges which are difficult to find. 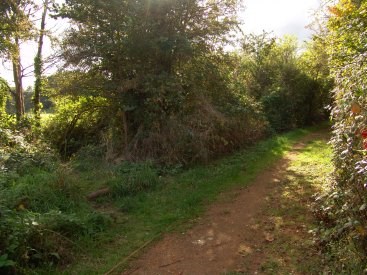 The feeder veers away from the pathway and one must continue for a bit until this short, but rather obscure footpath, heads off to the left. In about 20 yards one enters Priory Field, and a discernible path hugs the hedgerow. walk along this path to the far south eastern corner where one has to duck under a what is supposed to be a stile but which is so high that it is lousy and useless. Immediately beyond is the River Pinn and one of London’s unknown canal treasures – the ‘lost’ aqueduct over the river 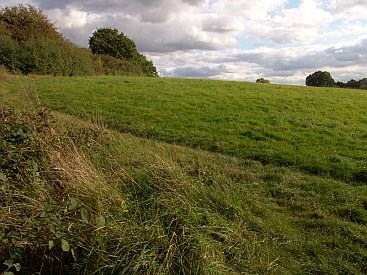 Clack Lane Aqueduct to the Railway 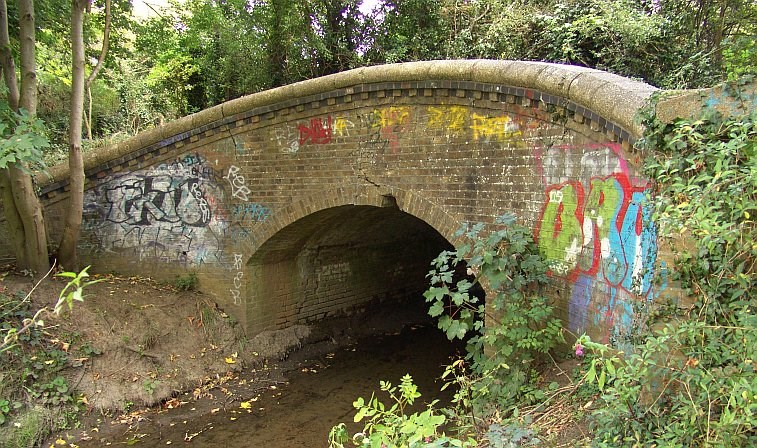 As aqueducts go, this is a bit of an odd affair. However it did carry the Ruislip canal feeder over the River Pinn. Clearly this rather elegant ‘bridge’ was meant to be functional and the canal feeder was carried on a large embankment across the Pinn valley, the bridge forming a culvert through which the Pinn flowed. As part of the 1930’s improvements (date inscribed on the bridge) a concrete channel was substituted, and this can clearly be seen. 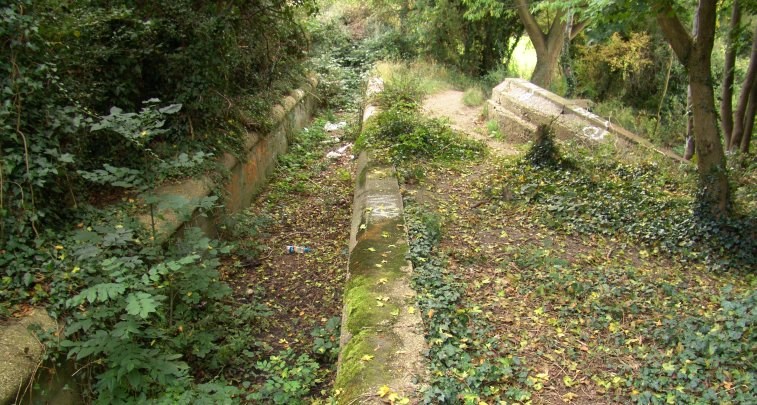 The concrete channel is clearly seen in the above view. The top of the elegantly curved abutment can be see on the right in this view looking eastwards 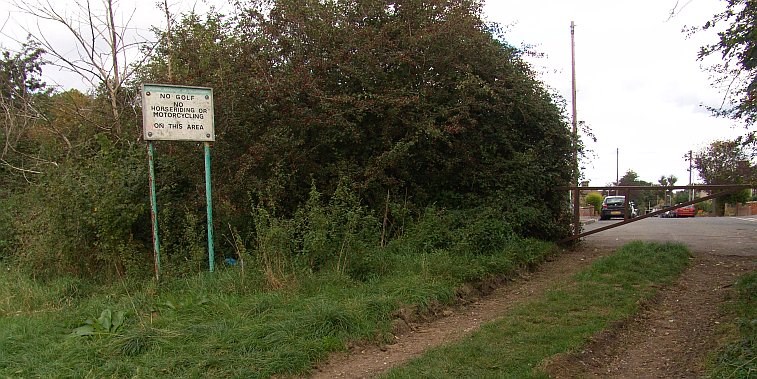 The course of the feeder disappears after the aqueduct, but it passed the bottom of Woodville Gardens and along the top edge of a field. Hedgerows more or less indicate the approximate course of the feeder as it heads towards Ruislip Golf Course. This is one location where the Hillington Trail signs should be ignored as they take one back to the River Pinn. Follow the headgegrow eastwards to the far end of the field and another overgrown and underused footpath crosses into the golf course area. The feeder is apparent for a short distance until its course is obliterated by the golf course

Carry On To Austins Lane Ickenham