Ruislip Lido Canal Feeder in Pictures
The feeder used to run from the Lido through Ruislip by Ladygate Lane and then over to the park area at the end of Woodville Gardens. If you go on to Google Maps it is still possible to see a somewhat fragmented blue line that shows the route. The route from The Soldiers Return pub to Glebe Avenue is missing.
Large sections of this route will be lost with the building of HS2 and the works that will have taken place in what was Ruislip Golf Course. As such these pictures are a valuable resource and if you have any similar ones you might have taken would would be pleased to receive them. You can either e-mail them in or, if you prefer, and they are in print, post them to us and we will scan and return them. 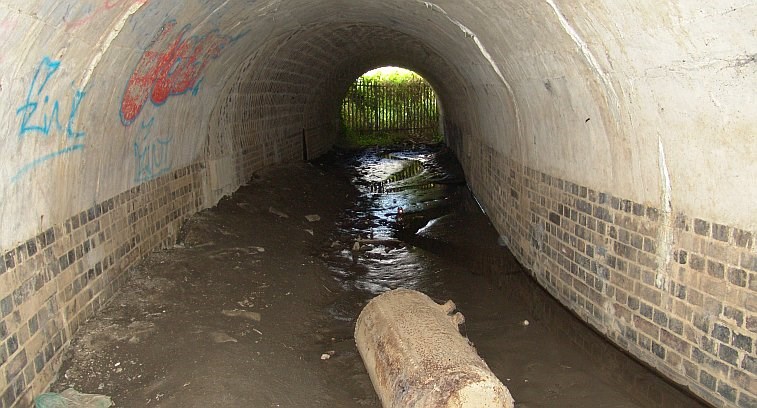 These pictures of the canal feeder were taken in around 2015 and are NOT copyright to this web site but we have permission to use them
This slice of history is going fast, either falling apart of its own accord or getting help with HS2 construction works. Ruislip Lido now has a lower water level than it did so the feeder does not run in water as if it did local houses could flood.
As you are no doubt aware the Canal Feeder starts at the "dam" end of Ruislip Reservoir, where it leaves the reservoir at the South-East corner.

There below the main footpath you will find a huge concrete opening, guarded by iron railings with a notice to the effect of "deep excavation" or similar. It flows through the old valve house, which controlled the flow of the Feeder as necessary when it was in operation. This can all be seen from the footpath along the top of the dam, on its "down" side.

At one time it was possible to actually walk around the valve house (and even IN it not so long ago) but this is now almost entirely inaccessible due to undergrowth and fences that have been erected. You can however see, from the path, the old Canal Feeder snaking its way from the dam along the rear of the houses and gardens in Reservoir Road.

It next appears where it flows under Bury Street, just south of a works compound and just about directly opposite Breakspear Road. It proceeds at an angle under Bury Street and its tunnel exits south of Breakspear Road and runs along the field there heading in the same general direction, to the right of the path as we follow it. As it slowly disappears into thicker and thicker undergrowth and bramble (and blackberries) it becomes difficult, but not impossible to follow until it actually comes to a dead end under the gardens of a newish housing estate. "Brickett Close". It is due to the fear of this being flooded that the "Lido" is now maintained at so low a level.