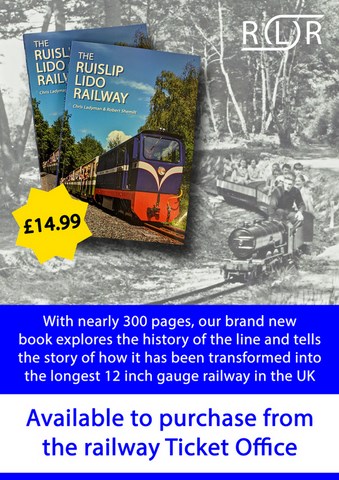 Get your hands on a copy of the new, limited print run,
book charting the history of The Ruislip Lido Railway.
Buy it here 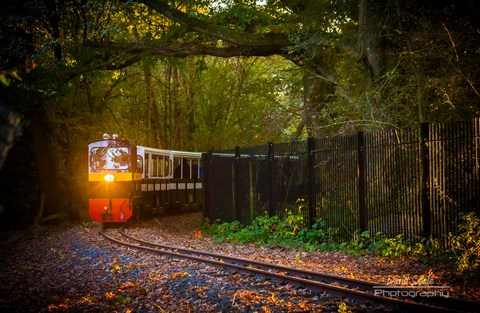 By far the jewel in the Ruislip Lido crown in the railway.
The Ruislip Lido Railway is the UK's longest 12" gauge railway and goes around the Lido from the beach side almost to the Willow Lawn Car Park. It is a two and a half mile round trip through the ancient woods, along the beaches and waters edge of the Lido.

The service is often run with diesel locomotives and on Sunday's throughout the summer and Bank Holidays you the steam service provided by "Mad Bess" often runs. The engine is a half-scale version of a train called "Blanche" from the Ffestiniog Railway in Wales.

More about the Lido and the Railway

Ruislip Lido was built in 1811 as a reservoir to supply drinking water for London via the newly built Grand Junction Canal. It was never successful in this form and sold to the Regents Canal and from there eventually coming into the ownership of the Grand Union Canal Company by amalgamation in 1929. The reservoir was always popular locally for boating, fishing and skating in winter, and the Grand Union Canal Company began to develop the reservoir as a health spa with the building of the Lido pavilion on the north shore in 1936.
After the second world war, the company wished to develop the Lido as a general tourist attraction, providing an outlet to war-torn Londoners and taking advantage on the restrictions on travel then still prevalent.

Numerous attractions, such as an artificial beach, paddle boat lake, rowing boats etc., were added, including (in 1946) a miniature railway. This used an ‘Atlantic’ type locomotive called ‘Prince Edward’, built by George Flooks of Watford before the war, and the railway and carriages were built to match the engine, using a gauge of 12 inches between the rails. A station was provided on the beach side called ‘Woody Bay’  where passengers boarded for a ‘round trip of 1000 yards along the edge of the reservoir and back broadly in a "Figure of 8" track layout.
When the canals were nationalised, responsibility for the Lido passed to Ruislip Northwood Urban District Council (and later, to Hillingdon Council). The Lido continued in popularity, and was used in films, notably ‘A Night to Remember’ about the Titianic where some of the lifeboat scenes were filmed (1958) and Cliff Richard in ‘The Young Ones’ (1961).

However, by 1960 the original steam locomotive was getting worn out, and this was replaced by a Petrol Electric locomotive built by Geoffrey Hunt of Bristol, based on a US prototype. This engine lasted until 1973, when it was replaced by a Petrol Hydraulic locomotive ‘Robert’, built by Severn Lamb to the designs of David Curwen. This had an outline similar to the mainline ‘Western’ locomotives of British Rail.
Sadly in 1978, an accident occurred. A train took the loop at the far end of the line too fast, derailed and ended up on its side. thus injuring several of the passengers, none too seriously but there were some broken bones. The railway was immediately closed, pending a decision on its future. The council considered getting rid of the railway altogether, and replacing it with a much cheaper ‘tractor-train’, but the they found the money to pay for safety improvements to allow the line to reopen, and appealed for volunteers to assist in running, and to later take over the service. Thus, some time later, the Ruislip Lido Railway Society was formed, and after an initial year of supporting the council to operate the service, took over the running of the railway from 1980.
The society had some great plans for the railway. In 1986, the original loop was extended, first from Wellington Junction to a new station called Eleanor’s Loop, then to Haste Hill station (1992) and finally in 1977 to Ruislip Lido station which is now renamed Willow Lawn. This meant a total round trip length of over 2 miles.

To join the engine called Robert new, more powerful, diesel, locomotives were constructed. Initially, two (Lady of the Lakes (1986) and Graham Alexander (1990)) Diesel Mechanical locomotives were built by the Ravenglass and Eskdale Railway and Severn Lamb respectively. These were followed by two more, (Bayhurst (2003) and John Rennie (2004)) both Diesel Hydraulics by Severn Lamb which have, more recently rebuilt to a similar drive system as the earlier locomotives by Alan Keef Ltd.
In addition, a new steam locomotive, ‘Mad Bess’, was built in the society’s workshops at Woody Bay, being completed in 1998. This is a half-size version of the Hunslet locomotive ‘Blanche’ from the Penrhyn (and later the Festiniog) narrow gauge railway in Wales.

New passenger carriages and some maintenance vehicles were also built, ultimately allowing two trains of 120 passenger capacity to be run on busy days. Also new sheds and ancillary buildings to house and maintain the fleet were needed and built. In order to support the greater weight of trains and more intensive service, the track has been significantly upgraded, the whole line being relaid in progressively heavier rail and sleepers.
All in all, the railway has changed beyond all recognition over the last thirty years, and is all set to continue this tradition of excellence and service to the public. It is a credit to those who volunteer and run it.
The contents of this section have been largely acquired from the Ruislip Lido Railway web site. 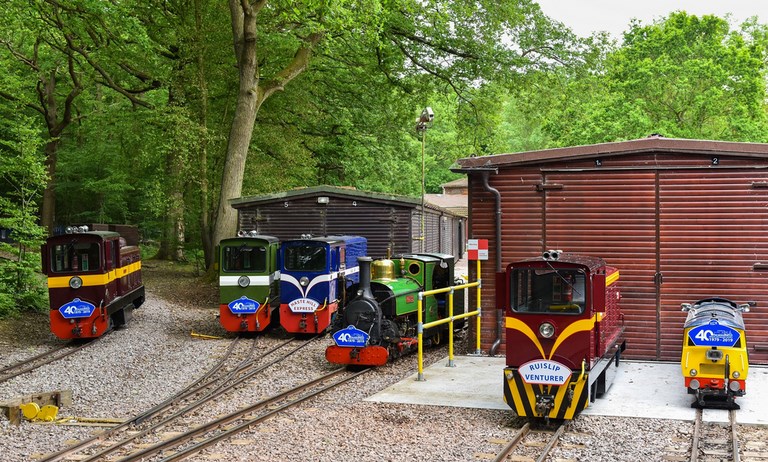 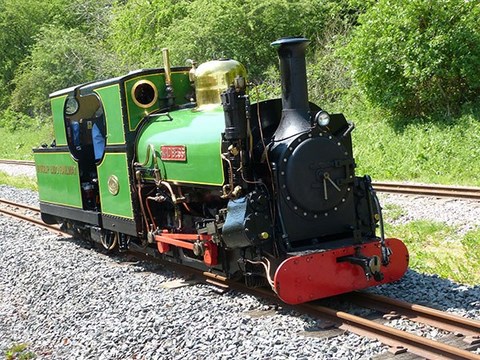